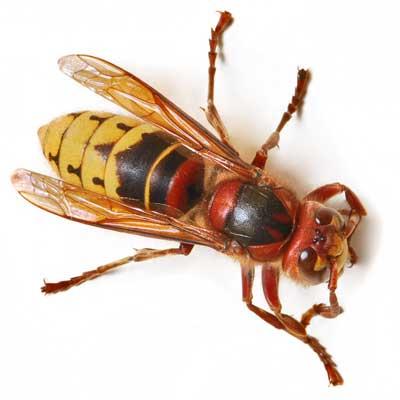 Many people are more scared of hornets than wasps, in part because of their larger size and brighter colouring. In fact, European Hornets are far less aggressive than wasps and will try to avoid conflict with humans.

Hornet populations across Europe are actually in decline and, despite recent media attention, are rarely seen in the majority of the UK. The European Hornet is sometimes seen in the southern counties and should you find you have a nest, Cleankill can assist you with its removal.

Hornets are natural pest controllers as they feed on insects such as flies, aphids and caterpillars. However they are not popular with gardeners as they will damage plants to feed on their sap.

Hornet stings are incredibly painful and can be life threatening to individuals who are allergic.  If you have been stung by a hornet or suspect you have been, visit this NHS choices page on dealing with insect bites and stings.

How to identify a Hornet problem

Hornets are often confused with wasps but they are much bigger - sometimes more than double in size. They have distinctive yellow and brown rings on the abdomen, differing to the black and yellow of a wasp. The nest of a hornet will also be much larger than a wasps’ nest.

The most frequent nesting site of hornets is hollowed out tree trunks but, like wasps, their nests will also be found in roof spaces, wall cavities and air bricks. They also like quiet areas of the garden like the shed and will even burrow underground to make a nest. Basically they will nest anywhere with a suitable cavity.

The queen finds and chooses a suitable nest site then builds a nest from wood pulp. She lays and cares for the eggs until they hatch. She then cares for the larvae until they are ready to pupate and become workers who then take over the development of the nest.

The queen and any new queens she creates will fly away and hibernate over winter but, as the weather becomes colder, the nest will die out. Old nests are not re-used in subsequent years.

How to get rid of a Hornet nest

Adult hornets are only a problem when they start to bother humans by foraging for sugary foods such as jam and fruit indoors, or around picnics and ice creams. Like wasps, hornets that come indoors can be treated by using an insecticidal aerosol spray.

Hornets are noisy when in flight and this makes it easy to trace their nest site. They are incredibly defensive of their nest and this is when they are most likely to attack. For this reason, be careful entering enclosed spaces if you suspect there may be a hornets’ nest.

If you suspect you have a hornet problem, it is safest to call in professional hornet control services. Cleankill's hornet removal services can treat and remove a nest at your property quickly and affordably.

To watch a video on how Cleankill dealt with a Hornet's nest, click here.

One of the most venomous insects known is the Asian Giant Hornet, which fortunately does not appear in the UK!