UK warned to be vigilant over invasive Asian hornets 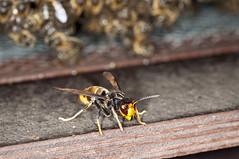 Croydon-based Cleankill Pest Control is warning members of the public to be on the look out for the potentially deadly Asian hornet.

The venomous Asian hornet, sometimes called the yellow-legged hornet, Latin name vespa velutina, is slightly smaller than the European hornet. Queens are typically 30 mm, males 24 mm and workers around 20 mm. It has a velvety brown or black thorax, brown abdomen and highly distinctive yellow legs. The head is black with a yellow face.

Indigenous to Southeast Asian, this species was accidentally introduced into France in 2004. Since then, it has spread across Europe, reaching the Channel Islands in 2016. Alistair Christie, Jersey’s hornet coordinator and the man tasked with stopping the advance, has noticed a dramatic increase in the number of nests on the island in the last year. In 2017, there were 17 nests recorded and destroyed, in 2018 this figure was 55, and so far in 2019 there have already been 13 confirmed sightings.

While hornets pose a risk to humans, especially those who are allergic to the venom, they are an even greater threat to our wildlife. Asian hornets can eat up to 50 bees in a day, making them a serious threat to one of our most important pollinators.

Last year, there were nine confirmed sightings of Asian hornets in the UK – in Lancashire, Cornwall, Hampshire, Surrey and Kent. The worry is that, while no sightings have been recorded since 14 October 2018, there will be a major increase as has been seen in the Channel Islands.

If you suspect you have Asian hornets on your property, the advice is to not engage with the hornets or their nest. If you can safely take a picture of the hornet, then you should email the image to the Non-Native Species Secretariat (alertnonnative@ceh.ac.uk). With the photograph, you should include details such as where you saw the hornet and how many you saw. Even if it turns out to be a different species, they would rather people sent in the images so they can monitor the problem.

An alternative approach is to call in a professional pest controller. They can accurately identify the species and help you deal with the problem in an appropriate manner. Remember, disturbing bees may be illegal.