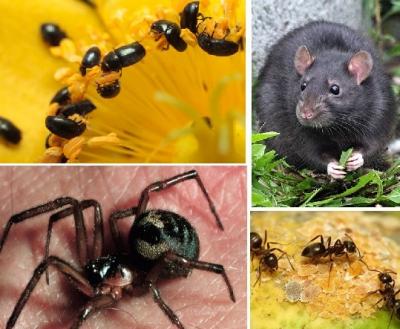 Today is ‘Black Friday’ – a retailer’s dream. All across the country there are queues of eager shoppers looking to buy discounted televisions, computers, clothing, and other consumer products. While such as day may not have existed in the UK a decade ago, it is something we have definitely grabbed hold of with two hands and embraced with full vigour.

As a pest control company, we don’t really do ‘Black Friday’ deals on pests – I doubt anyone would want an extra bed bug or rat at a knocked down price! It did, however, get me thinking about pests with black in their name and over the last few days we’ve posted a few articles about them. These included the Black Rat, the Black Widow Spider vs False Widow Spider, the Black Garden Ant and the black Pollen Beetle. I thought on today, of all days, it might be good to have a summation to sort myth from fact and, more importantly, decrease the unneeded use of pesticides.

If you have flower beds you’ve probably seen these. They aren’t always black but many in the UK are. In fact, while they may ruin the beauty of your flower head, they are harmless. As the name suggests, they are on your flowers because they are after the pollen. The UK has 36 different species of pollen beetle and, as I said, not all of them are black. They are normally around 2-3 mm long and have clubbed antennae.

If you want a picture-perfect garden, they may not help but they are harmless and should be left alone. There is no need to use pesticides with them and, in fact, they may actually be benefiting your garden by helping with pollination.

Rattus rattus, sometimes known as the Ship rat, the Roof rat, or the House rat, is a long-tailed rodent that originated in India and Southeast Asia, before spreading to the Near East and Egypt. During the Roman Empire, it spread across the whole of Europe, reaching the UK by the 1st century AD. In the last century, the Black rat has mostly been driven out of the UK by its larger and more aggressive cousin, the Brown rat (Rattus norvegicus). Today, the Black rat is counted amongst the UK’s most endangered mammals.

Part of the reason it has lost out to the Brown rat is that the latter will eat just about anything, but the Black rat prefers a limited diet of seeds, fruit and grain. They are generally also smaller, being between 10-24 cm, unlike the Brown rat which can be up to 28 cm in length.

In recent years, the Black rat has been spotted ion the UK again, including this sighting in Cornwall 1999. This 20-year old article is, however, still spreading the story that rats are to blame for the Black Death, but in fact scientists now think that rats have been maligned and in fact it was human fleas that spread the plague.

You’ll see Lasius niger all over the country and the one word I would use to describe them is ‘industrious’. If you’ve got ants under your patio, it is probably a nest of Black ants, if you see an ant running across your kitchen worktop, it is probably a Black ant. They have coexisted with us for a long time and they are harmless, if a little off-putting when you are eating breakfast!

The Black ant is normally around 3 mm in length and it eats a very varied diet. A particularly interesting form of food for them, however, is aphid honeydew. If you’ve ever seen a rose head with aphids and Black ants running all over it, the ants may well be protecting the aphids so they can ‘milk’ them.

The Black ant should not be confused with the far more difficult to deal with Electric ant or Invasive garden ant. These in-comers from Uzbekistan, Turkey and south-east Europe are attracted to electricity cables and fuse boxes and can cause considerable damage. The Black ant, by contrast, is normally just a bit of a nuisance.

If you think you have Electric ants, we advise you to call a professional pest control company as soon as possible.

You’ve probably seen the scare stories in the newspapers. The name False widow spider has even made it into the press concerning this season’s ‘I’m a celebrity…’. The False widow, as its name suggests, is often mistaken for the deadly Black Widow spider. Good news is that, while the former can be found in the UK, the latter cannot.

In fact, they aren’t that closely related, and the bite is nowhere near as toxic. Don’t get me wrong, they are (very mildly) venomous and their bite is very painful but it is no more dangerous than a wasp sting. It certainly doesn’t cause necrosis.

It is believed the False widow spider was introduced to Devon from the Canary Islands in the 1880s. Since then they have spread throughout the country. In the main, their webs will be found in window and door frames, but also eaves, downpipes and gutters. You will most often find their webs at least 1.5-2 m above the ground.

Obviously, if you think you have a problem with False widow spiders, you may need to call in professional assistance as the bite is nasty. They are, however, not an aggressive form of spider and most ‘attacks’ seem to be the result of accidentally coming into contact with them. In most cases, the British Pest Control Association believes, ‘bites’ are usually the result of secondary bacterial infection into the initial skin lesion, rather than a reaction to the venom.  They also have advice on how to deal with spiders.

‘Black Friday’ is a chilling reminder that Christmas is just around the corner. Rather than finish on these black stories,  however, I thought I’d leave you with a festive reminder of the time a mouse led me a merry dance in my own home.

If you need advice on protecting your home or business from a variety of pests, don't hesitate to contact us on 0333 920 3791 or click here.