Is it a bird? Is it a plane? No, it’s a Cockchafer 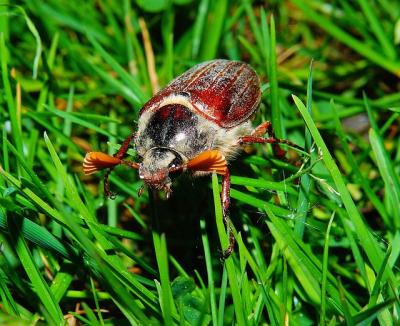 May was certainly a strange month. Last year, as we all went into Lockdown 1.0, the weather was glorious and everyone turned to the barbecue. This year the story was very different, with Spring 2021 being one of the coldest in a century. This had several knock-on effects, not least the fact consumers ditched ice lollies in favour of hot pots (according to one online food supplier). A more serious impact of the delayed summer is that nature has had a slow start this year.

One victim has been the May bug. A friend who lives on the outskirts of London has just sent me a picture of a rather impressive specimen crawling around her porch. As the name suggests, it’s more common to see this particular insect in May, although they can be seen anytime between April and July.

The May bug, Latin name Melolontha, goes by a number of different names, including:

Whatever name it goes by, it is in fact a Common Cockchafer.

While the name may seem funny to us, in fact it derives from late seventeenth century usage of the words ‘cock’ – meaning size or vigour – and ‘chafer’ – denoting bugs like this. The word ‘chafer’ has an even older heritage, with a root in the Old English word ceafor or cefer. This has a Germanic origin, meaning it is related to the Dutch word kever, and means ‘gnawer’. The name ‘cockchafer’ therefore means ‘large plant-gnawing beetle’.

This name is certainly apt. The Common Cockchafer and its grubs have a voracious appetite and can severely damage harvests. Citizens of Avignon in France were so concerned about their harvest in 1320 that they put the Cockchafer on trial and banished them. When the insect didn’t comply, the locals simply collected and executed them.

This large bug has been a source of fascination to children throughout the ages. For example, in Ancient Greece it was common practice for boys to catch a Cockchafer and tie a linen thread to its feet. Once released, it would then fly in circles. Just imagine the young Alexander the Great enjoying a bit of light, Cockchafer-based relief as he takes a break from his lessons with Aristotle.

In Victorian England, children would create a similar effect by sticking pins through the wing of a Cockchafer. In fact, the renowned engineer Nikola Tesla recalled how, as a child, he caught four Cockchafers and created an ‘engine’ by harnessing them in a similar way.

Cockchafers have always been abundant in Europe. In 1911, 20 million were collected from an 18 km-squared piece of woodland. This profusion makes it unsurprising that people have tried to turn them into food.

There are several extant recipes that use Cockchafers as a delicacy. In 19th century France, you might enjoy a steaming bowl of Cockchafer soup. In the 1920s, the German newspaper Fulda reports that children ate sugar-coated Cockchafers. There are also recipes for cooking the larvae, although they apparently require preparation using vinegar.

From abundance to near extinction

While Cockchafers have been a constant threat to agriculture in Europe, in more recent times their populations have been decimated to near extinction. The copious use of pesticides had a devastating impact on natural populations and, by the 1970s, some areas were essentially devoid of Cockchafers.

The fortunes of the Cockchafer changed however when we began to get a better understanding of the impact of these pesticides. Residues left on plants began to feed into our supply chains with negative impacts on human health, and insects became more resistant. This led to a reduction in the use of pesticides and slowly but surely Cockchafer numbers have increased.

Today, there are no pesticides licensed for Cockchafer management. Instead, agronomists use biological methods to kill the grubs, such as adding pathogenic fungi or nematodes to the soil.

How to identify a Cockchafer

The Common Cockchafer has two clear diagnostic features. Firstly, there are the unusual, fanned antennae – seven on a male and six on a female. The male uses these to detect pheromones, thereby allowing them to find a mate even in the dark.

Secondly, and probably the thing you’ll notice first, they are large. A Common Cockchafer measures between 25 and 30 mm and so you will certainly know if one is flying around you. When flying, they appear to be so large that you will wonder how they can fly at all.

Don’t be worried about Cockchafers

May bugs, doodlebugs or Billy witches may be alarming but they are harmless (unless you are a plant). They are not cockroaches and they do not sting or bite. So, when you see a flying May bug, marvel at the physics that keep it in the air and then count yourself lucky that you don’t live in Germany where they have the Large Cockchafer.

Image by Karsten Paulick from Pixabay