Invasion of the Asian hornet 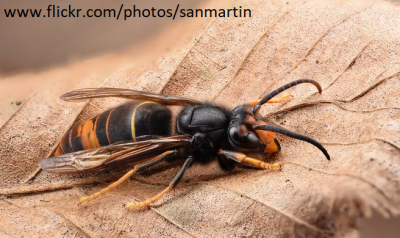 This month I’m thinking about hornets. To be more precise, Asian hornets. You may have seen several newspaper articles about Asian hornets in the last few days. That is because this week is the British Beekeepers Association’s ‘Asian Hornet Week 2019’.

Until 2016 there had been no sightings of Asian hornets in the UK. Since then there have been 16 confirmed sightings. In 2019, so far, there have been three sightings. The first was a single hornet sighting in July at New Milton in Hampshire. The second was in the Tamworth area of Staffordshire on 2 September 2019 and involved a nest that was destroyed. The most recent sighting was in Ashford, Kent, where a hornet was captured and confirmed by a Seasonal Bee Inspector on 9 September 2019.

Why are people worried about Asian hornets?

To put it simply, they present a significant threat to our native species of bee and other pollinators. They are highly aggressive and will attack and destroy hives. They are capable of eating up to 50 bees in a day.

As the name suggests, the Asian hornet is not native to Europe. It was accidentally introduced into France in 2004 and had spread to Spain and Portugal by 2011. In 2016, the first cases were reported in the UK and the concern is that these numbers will grow. It has not been ruled out that the Asian hornet can fly across the English Channel.

How to identify an Asian Hornet?

It had a dark brown/black abdomen with a yellow/orange band on the fourth segment. Its head will look dark from above and will be orange from the front, with dark coloured antennae. It has a black velvety thorax and yellow-tipped legs.

How to deal with an Asian hornet?

A note of caution, these are an aggressive creature. If you suspect you’ve seen one, I would advise you to leave it alone and on no account should you ever try to deal with a nest.

Instead, if you can, take a photograph of it. Also, record where, when and how many Asian hornets you saw and then email all this information to alertnonnative@ceh.ac.uk. The key thing is to let the experts deal with this pest because they will not only know what to do, including looking around for other hostile nests and destroying them.

There are several species that can be mistaken.

European hornet (Vespa crabro): larger than the Asian hornet, this species has brown ends to its legs. Its abdomen is yellow, marked with brown on the upper parts, and it isn’t banded. It also has a yellow head front above and the front and has yellow antennae. Its thorax is also black with extensive brown markings. To my mind, in colouring it looks closer to the classic wasp you will readily recognise.

Giant woodwasp (Urocerus gigas): larger than the Asian hornet, this species has females that can be up to 45 mm in length. It has a long cylindrical body, without the waist that is seen in Asian hornets. It also has distinctive yellow and black bands on its abdomen, yellow legs and long yellow antennae. The female also has an appendage at the back that looks like a sting but is in fact the ovipositor.

Click here to see an image of an Asian hornet. If you click on the names of the other species, you’ll be taken to an image of them.

Are our native species doomed?

We don’t, perhaps, need to get all Private Frazer about the problem just yet. We do, however, need to take it seriously. These are a very nasty predator and our native species do not know how to deal with them.

In Asia, the local species have developed ways to retaliate. For example, the Japanese honey bee has developed an interesting, if ultimately life-shortening, defence mechanism – the ‘hot defensive bee ball’. When a hornet attacks a hive, worker bees instantly form a ball around it. They begin to vibrate their wings to generate temperatures of about 46°C, which can last for over thirty minutes. If the bees don’t respond this quickly, the hornet will release pheromones that attract other hornets.

Interestingly, if the hive is attacked again, the same bees will make the second attack. This is sensible for the hive as a whole because the bees that have taken part in a ‘hot defensive bee ball’ are already diminished and will have shortened lives – the heat damages their brains. Other bees do the opposite, creating cool balls that suffocate the hornet, and some species do a sort of Mexican wave/dance that produces a shimmer of light that acts to deter predators, including hornets.

Unfortunately, European species have not had the need to develop these defence mechanisms until now. Therefore, at the moment, the best form of defence for our native species is vigilance by us. In all of the three confirmed cases this year, the sightings were made by members of the general public reporting the hornets. So, if you see what you think is an Asian hornet, report it to alertnonnative@ceh.ac.uk. Now is the time you are most likely to see them as they are very active in August and September.